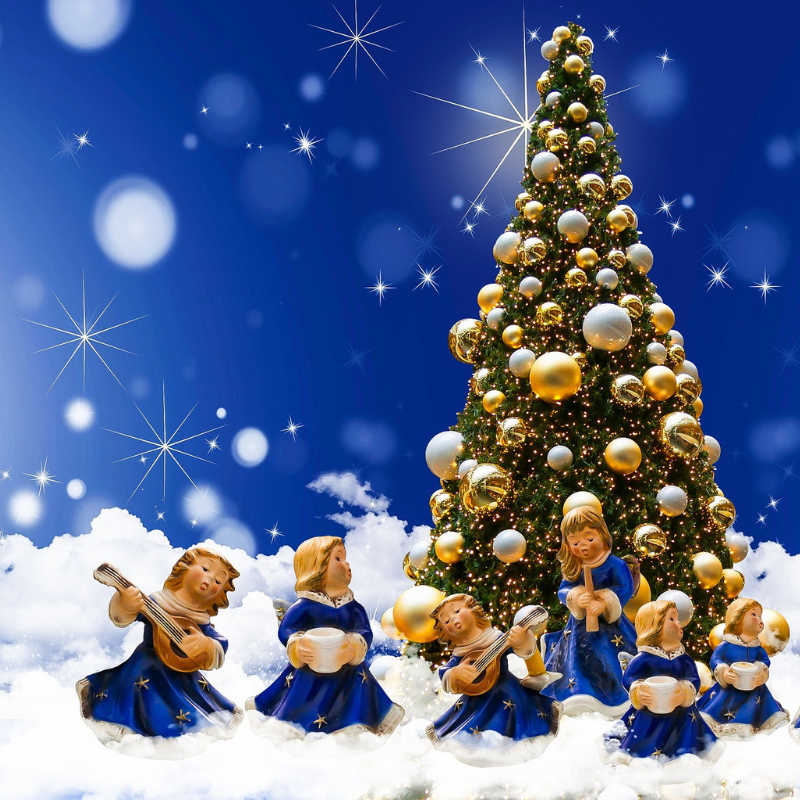 The Angels of Christmas

As a little girl growing up in a small town in Pennsylvania, I can remember my family all dressed up and going to our Christmas service with beautiful music and candles lit all throughout the church. My favorite part of the evening was singing along as loud as we could with the “Hallelujah Chorus.” Even though it may have only been 200 people, to my little-girl ears, it sounded like thousands of loud voices singing and praising God.  I wonder, is that what the angels of Christmas sounded like?

My best memories at every Christmas Eve service was of my mother singing the last solo of the evening before the entire group stood to sing all the traditional Christmas hymns, loud and strong. She had such a beautiful, sweet soprano voice and sounded like an angel.

Do you have any family traditions you enjoy with your children on Christmas morning? One of our family traditions is reading The Christmas Story. Because of my singing background, I smile with the verses about the angels appearing to the shepherds and loudly singing to proclaim the good news of the baby born in a manger. Luke writes:

“Nearby, in the fields outside of Bethlehem, a group of shepherds were guarding their flocks from predators in the darkness of night. Suddenly a messenger of the Lord stood in front of them, and the darkness was replaced by a glorious light—the shining light of God’s glory. They were terrified!
Messenger: Don’t be afraid! Listen! I bring good news, news of great joy, news that will affect all people everywhere. Today, in the city of David, a Liberator has been born for you! He is the promised Anointed One, the Supreme Authority! You will know you have found Him when you see a baby, wrapped in a blanket, lying in a feeding trough.
At that moment, the first heavenly messenger was joined by thousands of other messengers—a vast heavenly choir. They praise God.
Heavenly Choir: To the highest heights of the universe, glory to God!
And on earth, peace among all people who bring pleasure to God!
As soon as the heavenly messengers disappeared into heaven, the shepherds were buzzing with conversation.
Shepherds: Let’s rush down to Bethlehem right now! Let’s see what’s happening! Let’s experience what the Lord has told us about!
So they ran into town, and found Mary and Joseph and the baby lying in the feeding trough. After they saw the baby, they spread the story of what they had experienced and what had been said to them about this child. Everyone who heard their story couldn’t stop thinking about its meaning.

I picture this scene as if the people involved were like the actors of a Broadway musical’s opening night, just waiting with anticipation and excitement in the wings of the stage for their cue to enter. With boldness, the first angel speaks the cue found in Luke 2:12: “You will know you have found Him when you see a baby, wrapped in a blanket, lying in a feeding trough.”

Can’t you just see it? The company of angels finally hears their cue and designated time to join in the celebration and shout out the good news of the Savior arriving on Earth.

What a blessing to be able to bring the good news of a Savior born for all people! In the hymn “Hark, the Herald Angels Sing,” the lyric shares the entire purpose of the angels’ message:

Hark, the heard Angels sing, glory to the Newborn King, peace on earth and mercy mild,

It’s amazing to me that, out of all the ways God could have been announced and chosen to come, He chose to reveal the announcement to the common shepherds and, most importantly, to arrive as a helpless baby.

After the angels disappeared, the Scripture says the shepherds rushed into town to find the newborn baby, the Savior of the World. Once they saw the baby Jesus, they shared the story of wonder and the newborn Savior with everyone they could.

The angels were the messengers who passed the good news on to the shepherds, and they, in turn, passed the message on to the people in their community. Isn’t it so true: when you have the good news of Jesus, you’ve just got to share the joy and excitement of salvation.

Can God count on you to share the good news of Christ this Christmas with family, friends, and coworkers?

Dear God,
You are such a loving God, to come to the Earth for me as a baby. I long to be a messenger of the good news to others, but so often, I fall short of time and courage. Right now, I’m asking for you to use me in any way you desire this Christmas season to shine the light of your love to others. I long to be a positive witness for Your Glory. Thank you for sending the angels to the lowly and poor shepherds to remind me that, no matter who we are, You care and reach out to everyone who is willing and available. We give You alone all the glory!

Jayme Hull is a dynamic speaker and passionate mentor who motivates audiences to invest in others through mentoring. Shaped by countless mentors over the past, Jayme now has the privilege of mentoring millenial women for the past thirty-five years. As a Church Mentoring Consultant she trains Church leaders how to successfully produce mentor programs.