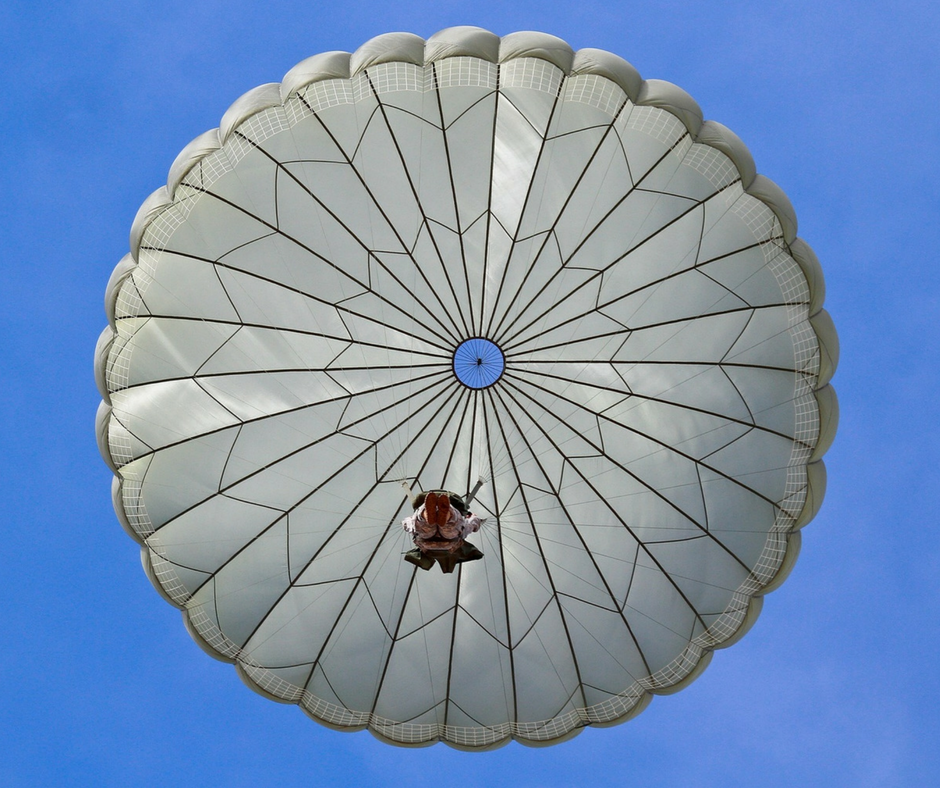 As a child, I was terrified of heights. I couldn’t climb to the second floor of a house without being nervous. I was always one to err on the side of caution and stick with the safest option. I would imagine the worst-case scenario and psych myself out more times than not. Adventurous was not a word used to describe me.

Much of that spirit of anxiety, cautiousness and playing it safe followed me into adulthood. More often than not, I’m erring on the side of caution. But here’s the deal – God did not create us to be fearful. 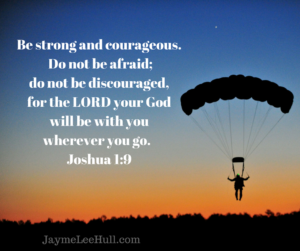 Have I not commanded you? Be strong and courageous. Do not be afraid; do not be discouraged, for the LORD your God will be with you wherever you go. – Joshua 1:9

Once upon a time, I took the whole “don’t be fearful” principle to a whole new level – literally. During college, with less than a week’s notice, I committed to skydiving with my best friend. Honestly, I think that not having much time to think it through worked in my favor on this one.

After about 8 hours of class, safety information, emergency precautions, and practice runs; we were finally ready for the 5-minute jump. The entire plane ride up, all I could do was pray. I was stunned by the beauty of His creation but also genuinely terrified about what was about to go down. It is truly amazing how humbling it is to gaze down at the Earth from thousands of miles up in the air.

After a moment of crippling fear as I stood on the wing of the airplane, by myself, I took a deep breath and leaped into the open air.

As I had prepared myself throughout the morning, I anticipated being entirely focused on the fall, the things that could go wrong, everything I was responsible for in order to ensure the safest sky dive. I was totally wrong. As soon as my parachute popped and I was suspended above the Earth, it all fell away. Literally and figuratively. It was me, God, and His creation. Nothing else mattered.

Suspended above the Earth, it was impossible to deny the Lord’s presence. I felt it in the wind that held my parachute up, in the sun that warmed my face, in the birds that flew nearby. I saw it in the patchwork perfection laid out beneath my dangling feet, the sparkling ponds far below, and the emerald green blanket that waited to catch me. In the moment immediately past my crippling fear, I found the Lord.

For me, skydiving wasn’t just about jumping out of a plane. It wasn’t about the bragging rights or the adrenaline rush. The entire experience was me actively, blatantly trusting God enough to conquer a fear I’ve lived with my entire life – knowing without a doubt that He was in control. I was at peace with putting my life entirely in His hands, and that was a beautiful moment.

[easy-tweet tweet=”I was at peace with putting my life entirely in His hands, and that was a beautiful moment.” user=”@JaymeHull” hashtags=”#nofear”]

While I can’t say that life since then has been without fear, I can say that I learned a lot about myself and the way I pursue God during that experience. The Bible tells us over and over – do not fear – and yet I find myself and those around me caught up in it.

For me, conquering such a substantial fear laid the groundwork for the less tangible fears I would come up against in the years to come. Stepping out in faith, knowing that the Lord ultimately reigned over my life and would sustain me, was such a liberating experience. I will never forget the triumph I felt when I stepped out of the darkness of fear and into the beautiful light of faith. 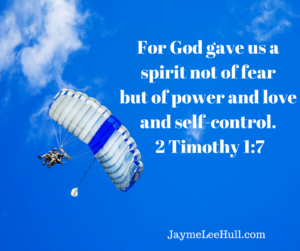 …for God gave us a spirit not of fear but of power and love and self-control. – 2 Timothy 1:7

Lean into the fear, step out in Faith – trust that the God who created the universe holds you in His mighty hand.

Make a decision to set fear aside today and chase after what the Lord has for you.

Kaylan Goodwin, a communications graduate from Missouri, works in marketing and development for a Nashville non-profit. A motivated millennial, Kaylan finds great joy in the written word, discovering hidden treasures and spending time with her sweet husband.