How To Rise Above It

Integrity matters. Character counts. Start with kindness, end with a win. These are foundations of truth for a beautiful life’s make up. But none of these things stick nearly as well as the life that is first primed with God’s Word.

I’ve got a little sign that I can change out the letters on to write little messages. You know the kind of sign- the ones that fast-food restaurants and gas stations use to advertise local promotions and where lack of the letter “m” calls for a “w” to be placed upside down. My first message on my sign has been not just a cutesie decoration, but in actuality, a sermon to my own heart. “Rise above it,” the black letters preach from their pulpit of neon.

Life is full of unpredictable story plots and equally unpredictable people. Some of those things can cause a heart to feel like it’s drowning in sorrow, anxiety, grief, or all of the above. The soul only can rise above deep, stormy waters when it is anchored to the God who actually IS Truth, Rescuer, and Reprieve. He embodies His Word and we can actually touch the pages of it.

Whether residing in the shallow end or the deep end of His Word, it still washes over a dry soul. It’s up to each to decide how immersed in the Living Water he or she chooses to be.

I’ve recently been reminded of the story of Peter. In the midst of a storm, which was rocking the boat in which Peter was traveling, Jesus was already on His way to bring peace. But the disciples got spooked when they saw Him. He wasn’t in another boat, trying to throw a lifeline attempting to do the best he could to save them and drag them to shore. No, He was there for them to see HIM walking unshaken in the midst of the storm and to shift their eyes from the crashing waves and howling wind to Him. Peter saw Jesus walking on the water and asked Jesus to prove it was Him by saying, “Come.” I think Peter wasn’t expecting for it to actually be him. He went, but he got spooked again and his eyes shifted from the object of his peace to the storm and it was in that moment and that decision that he began to sink. Still, the Prince of Peace graciously reached out to rescue the man he had told to come to him. And when Jesus got inside the boat with Peter, the storm calmed. 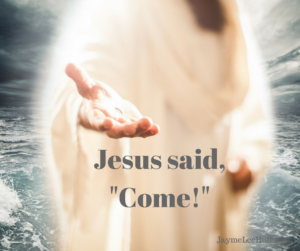 Jesus says the same word to all of us, “Come,” meaning, “Come to me…I will give you peace because I actually AM peace.” The waters and winds of life that toss us about and make us gasp for air can be terrifying and daunting to be sure. But Jesus beckons us to rise above them, not by trying to problem solve or by asking us to just muster up the most strength we can, but by simply looking at Him.

When we look to Jesus in our seas and seasons of uncertainty, we can be certain that He will hold our hands and our heads to rise above it. He will take the life that is drowning and transform it into a life that is crowned with peace.

Friend, whether you’re gasping for air or in a holding pattern, look to Jesus and His Word to help you rise above the seas on which you’re traveling. When you do, you’ll be primed with what you need to handle adversity and to handle it well. Your core will be recognized by your character because you will build your character off of the God whose character never changes.

In a world that often leaves many breathless, God can breathe new life into a drowning soul and give strength to worn out, trembling legs to rise above it.

Come. Come to Jesus and fill your drowning lungs with His Word. Then, my friend, you will truly rise above it.

Emily is a writer, based out of Southern Central Virginia, where she lives happily with her husband, miracle baby son, and their sweet dog. Her hope is to encourage others who are journeying where she has walked with the same hope and comfort she has received from Christ.