How To Protect Your Lamb From The Wolves

Jesus warned that wolves, robbers, and thieves lurk in the sheepfold. But, because these people are often charismatic and engaging or hold esteemed positions, we disregard this warning, especially when they pose as shepherds. John 10:1-18 describes six different types found in a sheepfold. Here’s a quick look at some of their predominant traits.

Sheep need to be fed and protected. Composing the majority of the sheepfold, they tend to naively follow other sheep and the leaders.

Shepherds are identified by their caring natures and scars. Even though they come with different personalities, they share a common concern for the welfare of Jesus’ flock (John 21:15-17).

Shepherds are found in families and in Christian and secular groups. They fight for the sheep to protect them from the wolves.

[easy-tweet tweet=”Shepherds are found in families and in Christian and secular groups. They fight for the sheep ” user=”@JaymeHull” hashtags=”#shepherd”]

They bear the marks of spiritual battles fought to protect the sheep. Jesus showed Thomas His scars (John 20:27). The Apostle Paul’s scars authenticated His ministry (Galatians 6:17).

Battles and scars come with shepherding. In the persecuted church these scars may be physical marks on the body. In our country, they more likely come from slander and shunning.

This might be for salary, prestige, position, or to meet personal needs. They withdraw from messy battles where they may get hurt. They usually don’t attack the sheep, but they don’t sacrifice to protect them either. They abandon the sheep and real shepherds when the going gets tough. They may be talented and learned, and even have some affection for the sheep, but they lack the personal character or spiritual integrity to stand against opposition. How different from a servant who nurtures the sheep out of love for the Good Shepherd (John 21:15-17).

They use them to satisfy their own appetites. Like shepherds, wolves may be scarred, but not from laying down their lives for the sheep. They appear good—maybe too good to be true (2 Corinthians 11:13-15). Despite their sheep or shepherd’s garb, their true nature is revealed by how they treat the sheep. Pretending to represent Christ, they wound unsuspecting sheep within the fold. Bruised and bleeding, the wounded sheep associate the injury with Christianity or worse—with God.

Ravenous wolves slip into groups you think would be safe and protected. Talented, outwardly polite, or overflowing with the personality they can produce amazing ministry results, but Christ will say to them, “I never knew you” (Matthew 7:13-23, 1 Corinthians 13:1-3). They lack the hallmark of a true Christian—love.

Robbers and thieves fleece the sheep.

They can destroy faith and fellowships. A robber is overt in his stealing whereas a thief, like an embezzler, is sly. When a robber steals from you, you know it. Your house is ransacked or he’s stuck a gun in your back. The embezzler may steal more but is so clever it may be years before you wake up and realize what you have lost. Jesus used both words to describe the false prophets who enter the sheepfold.

“The thief comes only to steal and kill and destroy; I have come that they may have life, and have it to the full” (John 10:10).

If your mentee seems wounded by someone in her life, don’t brush over it. She may be in the clutches of a wolf, robber, or thief.

On the other hand, if you’ve been attacked for practicing integrity and for protecting the sheep, rejoice. You’re a real shepherd!

Debbie W. Wilson is an ordinary woman who has experienced an extraordinary God. Drawing from her personal walk with Christ, twenty-four years as a Christian counselor, and decades as a Bible teacher, Debbie speaks and writes to help others discover relevant faith. She is the author of Little Women, Big God and Give Yourself a Break. She and her husband, Larry, founded Lighthouse Ministries in 1991. Share her journey to refreshing faith at her blog www.DebbieWwilson.com 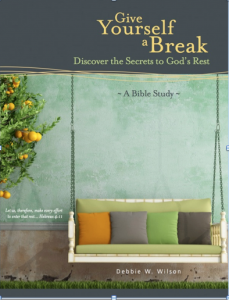